Well came and went and I survived. I remember seeing people saying how much of a challenge it would be and I became a little daunted by it. But, in truth, it was fairly easy and I was comfortable. Have a read below to read my overall thoughts on the month! Enjoy!

Will I stay vegan?

Sadly no I won’t, but as I stated in the first post in this little series, it was never my intention to become a vegan. I wanted to see if I could adapt and see where it took me. I know I enjoy meat and that I will not give that up quite yet. But, I know now that there are great options for me to eat more vegan meals as time goes on. Luckily for me, I have Victoria in my life who is vegan or plant-based, depending on what you like to call yourself. That means that throughout the near two years that I have been with her that I have been eating less and less meat and animal products. I guess you can call me a flexitarian if that is right? I dunno, but there we are!

Something I have been actively doing is trying to purchase my meat from actual butchers as by the end of the year I would like to not have any processed meat and to buy as local as possible. I can’t imagine that this is going to be an overly difficult task as I live quite near a lot of good butchers. Being ethical and being a meat eater is a tricky thing to do and I will do my utmost to do it. So I may need a lot of advice on what I should and should not be doing as one.

Did I notice anything different?

Body wise, yes I got quite ill at the end of the month, with a total loss of energy and actually had to take a few days off work for the first time in my life. I am not sure what it was, but Victoria believes that it could be because of a virus and the fact that I seemed to have a bit of iron deficiency as she had a similar experience. I did not like that and I honestly thought that I would have been able to cope without any supplements for a month so I didn’t take any. I now know better and will log that little experience into the back of my brain. Good to be wiser and all that.

What would I do differently?

Well now that I know that some major brands are just outright horrible tasting, I know which I can stick with and what meals really work with me. Having Victoria in my life is really a Godsend as I think she has really improved my cooking skills as I would never have guessed what to cook for her before. I like learning (cheeky plug to learning a new language…) so learning to cook more for her needs was high on my agenda and it is so easy. To the point where it is all second nature and if I fancy any meat in my meal that night, I just add it at the end so there I no cross contamination. 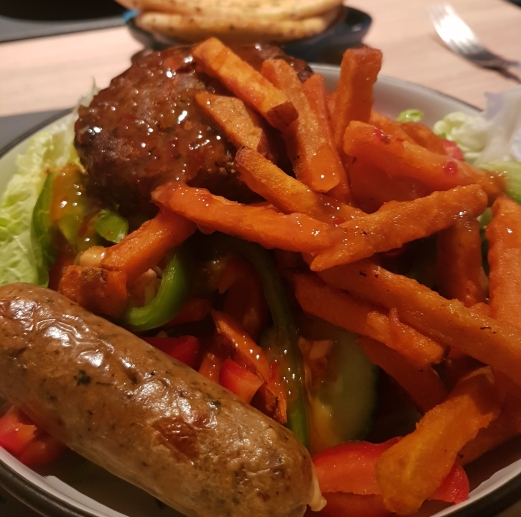 One slight issue I had was that I have been wanting to go to a Keto diet for a while and one thing I noticed was that I was sticking a little to some processed carbs and some sugars as I felt like I was needing something. Some research into that will be required to see what I can do, moving from rice and pasta to cauliflower rice etc is the main option. I really enjoyed the salads that I was having, but obviously, I would get pretty bored of that no matter how much I tried to spruce it up.

If I am not going to fully become a vegan will I do Veganuary again?

Yes I do believe that I will do Veganuary every year as I know I can do it quite comfortably and by working on new dishes I feel that I may really enjoy it next year. I actually think that I will do it for over two months every year. So maybe I will keep with January and then also start a Vegune (June), a nice six months in between each one should be fine for my body to fully readjust as I am still trying to work out why I lost a lot of energy and got that illness at the end of January.

I am sure that I am missing out on things and if I am I will come back and add them. I think I should just end it with the fact that I enjoyed it and while I won’t be a full-time vegan or plant-based eater, I will increase the amount I do eat… Just got to figure out how to get rid of those processed carbs!

If you would like to read my other posts on the matter, have a gander down below! Until next time!

Vegan and dietary need cooking: When you mess up

Veganism: My first encounter with cooking a vegan meal.

If you want to chat more about any of my posts, please follow me on Twitter, Instagram,and Facebook to also receive updates. Until next time, thanks for reading and I hope to see you again soon!

One thought on “Veganuary: A look back”