Happy day folks! Happy happy day! I am posting this on a Sunday (run day), but you might be reading it on a different day. So I hope you have enjoyed or are enjoying this day. A bit too cringe? Well, that is my specialty! This week I want to chat about running in the dark and how great and annoying it can be! Let’s jump into it and see if you do the same!

Running to see that sunset

When I was fully in my running mojo, and I was off work that night, I would get on my running gear and pop out for a run outside for a run. One of the reasons for me getting out there would always to catch that sun setting over Cavehill (for a non-Northern Irish person that is a nearby baby mountain). It is just a great view and I love seeing it on the 10km run. Why? Here is why! 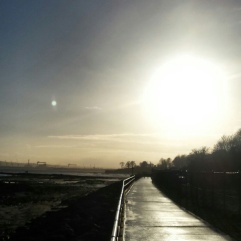 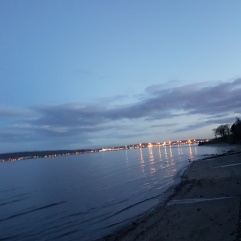 Not a bad view right? I would always get these pictures at around the mid-run stage as I was taking a little breather and a bit of water. I would always feel a little lucky that my running route had such great views. On the other side of this would be Belfast Lough and the lights from the dock and across the city come across the lough and it is quite calming. The calming effect I think (probably wrong) helps me with the run back as I am able to distract myself from the running and think about what is around me. It is just great and if you run at night, make sure you have a part of the route that is pretty to look at while out there!

Great way to end the day

When I worked in the cinema I would always have this energy still in me after a shift, didn’t matter what time it was, 6pm, 8pm, 10pm. I would have this energy within that needed gone and to do that I would run. Now, there were times that I would go to the gym, but they were on terrible weather days or if it was past midnight and probably a little too late to be running. It did take a lot of effort to get dressed and then go straight out, but when I did do it.

I felt so much better for it! I know that is all purely mental and that I shouldn’t be relying on running to keep me happy, but when I was stuck in one building for so long (usually 9 or so hours) the chance to get out and be free was so relaxing to me. Also knowing that despite working all day that I had accomplished something exercise related also triggered the well-done portion of my brain. Running is weird, or my brain is weird… Probably both!

Running at night does have it’s drawbacks however and one of them was probably the most frustrating for me. As a runner, you are trained to weird bright reflective clothing at night so that anyone and their mother can see you out there. It isn’t just for your safety, it is for everyone around you. So when I get to a certain part of my usual route that does not have lights  I always know that I am going to almost bump into someone walking in the dark, all in black. I have my jacket or vest on, my hat, a head torch, even fluorescent bloody socks to make myself visible for everyone (usual cyclists) so we do not have an accident and these idiots can’t be bothered to put on a band or anything to make sure they are also safe!

Sometimes, despite my torch, I have missed them and almost bump into them… Why? I dunno, maybe because they pop out of nowhere to start walking. It is so frustrating! If I am going full pelt and just about dodge them, a cyclist who maybe doesn’t look for a second may have even less time to react to get out of the way. It is dangerous, so please, I beg you, wear something that we can see you in! 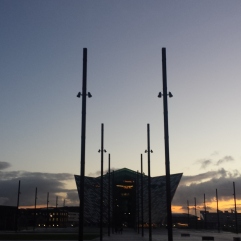 No one can see me fall over…

It has only happened once (luckily for me) and I have documented it before, but thank goodness that the one time I feel over was in the dark as if I had seen how bad my knee was after the little tumble, I probably would have stopped running, but the runner that I am and much to the aghast of Victoria, I finished my run. I think I told her I finished the run because I had only gotten a mile and a half in and I was wanting to get around 6 miles (10km) done that night. Also, I am happy that I feel over in the evening because…

My running routes are fairly quiet at night

Today Victoria and I were running the towpath and there had to be a couple of dozen other runners and then some cyclists and walkers going past us. Imagine falling over in front of others! I would despair, but also get over it as I love that route and I gotta run!! But yes, it was fairly busy on this lovely summers Sunday. Whereas at night… It is quite and you rarely see someone else, other than a cyclist going by. The main regulars I would see would have been a group of gentlemen walking a little bit up and down after their evening in the nearby working man’s club. So you rarely have to think about other people on certain portions of the route as it is just you and the tide from the lough. Very relaxing…

Trying to dodge walkers with dogs on leads

You know what is worse than someone wearing all black in the dark? Someone wearing all black in the dark who is walking their dog and has the leash extended 15 miles so you have to try and jump over a virtually invisible wire in the darkness. Super work team! I honestly do not know what people are thinking sometimes. It is so dangerous, a cyclist would get hurt massively, I might just fall over and bloody a knee. Just a terrific amount of recklessness going about!

Going to bed right after a run

Finally, my absolute favourite thing about running at night is that after that shower or bath, you just go straight into bed and your body thanks you a billion times and you just sleep and have the best sleep in the world that no one who doesn’t exercise just before bed can ever relate to… Ever! Oh my, it is glorious!